There’s nothing like the first race of the season; it’s what we wait all year to do. But on this race morning, with my windshield wipers frantically flip flopping to chase off huge droplets of rain pelting my car, I mumbled a few words of disdain. The temperature gauge registered at just 5 degrees and with three layers of clothing, a toque, mittens and wool socks, it hardly felt like the beginning to triathlon season. This was normal dress for a weekend snowboarding jaunt, and with the fresh blanket of snow glaring back at me from the hills, I felt a cruel mocking from Mother Nature.
As I racked my bike in transition and covered my shoes, saddle, and running gear with plastic bags, I had to smile.  Whether it stopped raining or not, I would eventually be soaked after the swim, and staying warm would be dependent on how hard I worked. Work harder, go faster, stay warm; seemed simple enough. 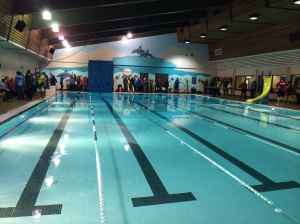 My heat time slowly approached after almost four hours of dancing around to keep warm, and all the familiar pre-race jitters began. Like a neurotic rain man I mentally ran through transition and the course map a million times over. Four laps. Three laps. Left, left, right, left, left. Bike, shoes, helmet, hat, runners, race belt. Over and over again. Once you’ve had one triathlon disaster nightmare, these things become an obsession.
Soon enough, there was no time left to mull over the details, I was in the pool, waiting for the go signal. Then, my favourite swim adjective, came to life as I flailed like a frantic demented dolphin through the water. I learned last year at my last race from Maurice that the key to a sprint triathlon is to go balls to the wall. There is no pacing or strategy, you just go as hard as you can, or as he put it, “you want to feel like you’re on the verge of puking the whole time.” So, without any rhyme or reason, I flailed through the pool as fast as my feeble arms would allow. Everything was blur. The sounds on the deck were muffled, at the end of every length the wall seemed to come out of nowhere, I inhaled water, fumbled under the ropes, things seem to spin and as I clambered out of the water and onto the deck I felt out of sorts as I ran out of the door and into the freezing rain. Tearing off my cap, and goggles I flipped on my lid, ripped off the plastic and flew out of transition with bike in tow.

The roads were flooded and the cold wind whipped at my bare skin turning it a bright shade of red within minutes. This only inspired me to pedal harder; it was all I had to try to keep warm. With each lap, I scanned the crowd for my coach, and with his encouraging words, I charged forward even harder. And still sputtering from mouthfuls of chlorinated water, I had been on the verge of puking since the first 100 metres of the swim; perfect execution.
As I rounded the final bend back towards transition, I reached down to un-velcro my shoes and pull out my feet, and it was like having ice cubes for fingers. I fumbled like a child learning to tie shoes, and miraculously pulled my feet out, rounded the curve, hit the dismount line and started running. At this point, I had no idea if my feet were even hitting the ground. In fact, I probably somewhat resembled a gazelle running across hot coals. I heard people commenting on my poor, red bare feet, and with an odd sense of self-satisfaction and bad ass-ery, I smiled.
Then it was rack the bike, grab the race belt, throw on the shoes, discard the helmet, throw on the hat and go. As I peeled out of transition in between heaving breaths, I yelled at Maurice, “I’m so cold!” and all he yelled back was, “GO! Fast, fast, fast!” Remembering that I was in fact racing, I quickly switched my mind back into race mode and tried to block out the numbing sensation in every inch of my body and move my giant ice block legs forward. I was sputtering, there was water in my ears, and all I could hear was the hollow sound of my heavy breathing and grunting, as I continued at my on-the-verge-of-puking pace. All I could think of was moving one foot in front of the other, as fast as my legs would allow.
Finally, I hit my final loop and rounded the corner towards the finish chute. By this point I was warm. Not fuzzy under a blanket warm, but at least I felt the rush of blood through my body again, and the rain had stopped. Once under the finish arch, I almost had to be grabbed to stop, as I charged through, my legs just wanting to keep on going. I glanced down at my watch to see a time that was almost 10 minutes faster than last year. There was a rushing feel of pride and happiness. All the flailing pool workouts, killer hill climbs and heart pounding tempo runs have paid off, and it felt so good.

Race one of the season, done, and one race closer to becoming an Ironman. The adventure continues.