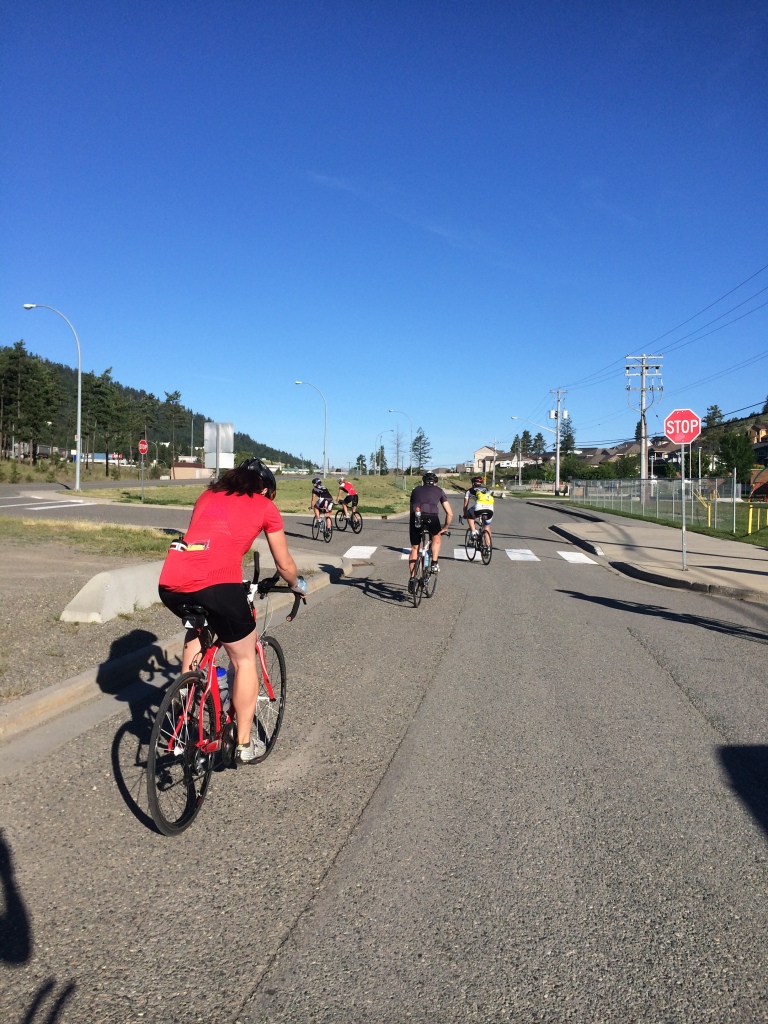 Holy shit. Holy shit. These were the only words I could mutter out in delirium as I lay spread out in the back of my air conditioned car. My legs were burning, but somehow wanted to keep going; my skin was burning, like it was on fire; and my ass felt like it had been sitting on a steel pole for days. This is the aftermath of the biggest cycling adventure of my life, from Kamloops to Merritt and back again, totalling just under 200 kilometres in the scorching interior heat. It kicked my ass, and I learned a lot about myself, proper sunscreen application and hydration.
For the first 50 kilometres to Logan Lake I partnered up with a couple of the girls in the group and we coasted together in somewhat broken unison, drafting behind one another, then spinning separately, rejoining to chat side by side, and then flying down hills like children let loose after school. The scenery along the route was breathtaking, and the calmness of nature surrounding us made me entirely forget about what lie ahead. With each passing lake I would stare off at the glassy motionless surface, only to be interrupted by soaring birds, or floating butterflies. I had my iPod plugged in, yet the sounds of the world just waking up was too beautiful to be overtaken by my music.
As we descended upon our first pit stop in Logan Lake, the team regrouped to rehydrate and refuel before saddling up again for the next 50 kilometres to Merritt.
Part of the group took off ahead with three of us lagging behind enjoying the new stretch of road before us. Once again the landscape was incredibly calming and pristine. As we watched the group cycle in unison ahead three stunningly graceful deer pranced across the highway just in front of them. They must have been frantically trying to avoid collision with the oncoming bikes, but from my perspective, they just looked peaceful and majestic.
For the next stretch in our journey I would chase the group through the winding, rolling valley; tucking into TT, flying around the bends and absorbing the landscape before me.
Coming into Merritt I felt a little tired, but mostly strong, and exceptionally happy to hit the halfway mark where we could once again refuel, rehydrate and relax. Like toads sunning on a log we splayed out in front of the Husky station, eating foods high in sugar and salt, while some of the smart ones re-slathered lotions and lubricants. Within a few minutes, the rest of the gang who started later in the day arrived to join us and our little group had grown. 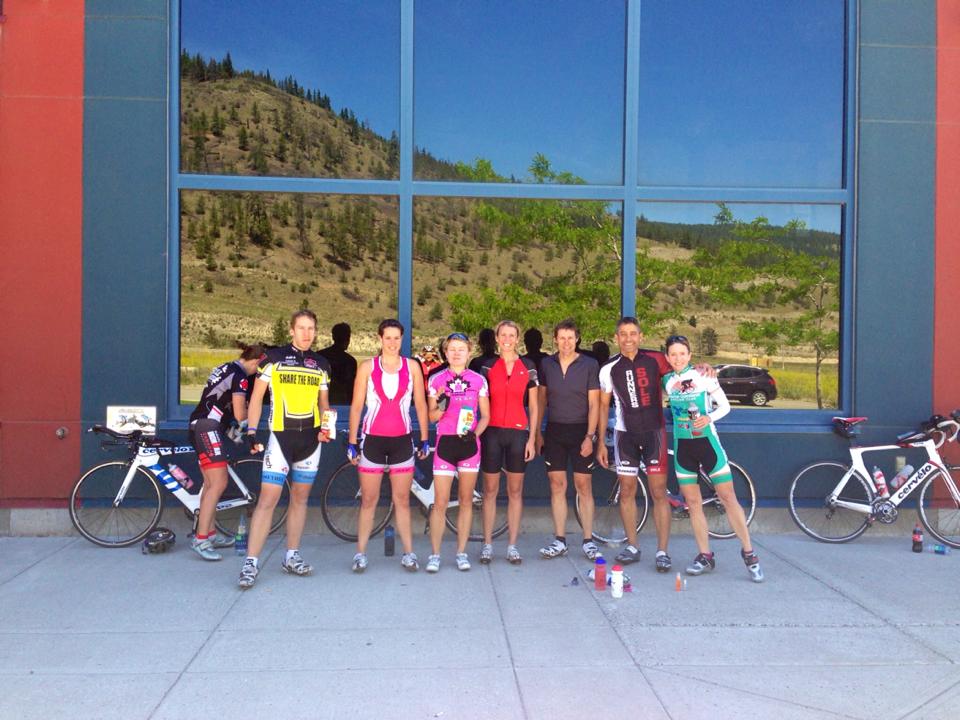 Ready to hit the road again for the final 95 kilometres we started off as a pack, drafting in perfect unison. We were maintaining a solid speed, and I felt comfortable that we would stick together at this pace for the journey home. Yet, slowly the pack started to wean as the fast ones picked up their speed and one group became two. More stunning scenery lay out before us, but within a few kilometres of hitting the highway it was rudely interrupted by the constant roar of erratic semi trucks barreling down the road. At times I wondered if they even saw  the pack of tiny cyclists on the barely-there shoulder beside them. I was terrified; one slight, wrong move to the left and we would have become pancakes beneath wheels that seemed to tower over us. If it came down to it, I would have leaped into the ditch to avoid such demise. As each roar came up behind me, my shoulders hunched in feared apprehension and it was all I could do to not close my eyes and veer off the road. As cyclists, we will always be on the losing end of a battle with any type of vehicle. Our lives are at risk on the open road, and accidents can happen because drivers are reckless and careless, which usually stems from impatience. It seems foolish but it happens, and so we ride with caution, and sometimes even fear. Unfortunately, this seemed to set the tone for the rest of my ride. I was rattled and I continued to unravel as the kilometres ticked away. I started to feel tired, my legs were feeling heavy, I could feel myself slowing. I was becoming less and less happy, and I wanted to burst into tears. Usually this is a sign of bonking, and that you need to refuel and fast, but even the happy colours of gummy bears, a gel and a chocolate bar couldn’t save me. For the first time I started to feel the heat of the sun bearing down on me and realized how dehydrated I felt. Two of my group mates realized I was on my dying last legs and told me that with 52 more kilometres to go that I had no choice but to keep on going. For the remainder of the ride they rode along with me, even as we slowed to a turtle’s pace, and even as I cursed at the world for really nothing in particular, and spat back up water all over myself. I drafted in behind them, while at some points Vince even literally pushed me along. The pain continued to intensify as my legs started to cramp and I could feel every pang within my body start to scream. The heat burned me into somewhat of a delirious state where the side of road began to look like moving waves and my training partner’s voices just began to muffle with the wind. I couldn’t quite think straight and at that point I don’t quite know how I was keeping my bike straight. Then I started questioning my insanity, and if I really had it in me to become an Ironman. Then I began to have a yelling match in my head and nothing really quite made sense. The only thing that brought me back to reality was a soaring eagle that landed with so much grace and power on the beach just beside us that I found a kick within my legs for one brief fleeting moment. Then it was back in my head where I began to repeat to myself, “home, home, home,” yet all I could think about was Cardiac Hill – our final climb of the day, which was slowly approaching. With more than 180k behind me and perhaps a bit of heat stroke kicking my ass, I was thinking about every which way this hill was going to live up to its name and actually kill me. So, when it finally did appear, curse words fumbled from my clumsy mouth, and Vince gave me words of encouragement like he was leading me into battle. With his hand on my back, he literally helped push me up that entire god damned mountain. Even as I sucked back oxygen like a dying cat and made horrible dry heaving sounds, he continued to push and continued to tell me that quitting wasn’t an option. My body screamed in agony and I yelled back to him that whatever my legs were doing, moving or not, it was all I had.

By the time we reached the top, I literally toppled off my bike and lay in a heap on the side of the highway. At first I was certain I would not get up as the earth spun around me, and I struggled to sit upright. I sat there with my head in my hand for only a minute or two before I finally decided I was no longer interested in hearing my internal voice whine any longer. So, with that I got to my feet, clipped in and carried on for what would be the longest 12k of my life back to home base.
We were out on the road for about nine hours, with a total riding time of 7 hours and 45 minutes. I can say without a doubt this was the biggest mental and physical challenge of my life. I learned that applying sunscreen more than once in a nine hour day is essential and that it should cover every last inch of your body. I learned that my bum is not as cushiony as it looks, and that eating a Snickers doesn’t always morph you back into your normal self. More importantly though, I learned how far I will push myself. For 52 kilometres I battled one of the toughest mental fights of my life – to give up or keep going. I chose the only option I’ve ever known – put on those big girl panties and keep going. Looking back on the journey, I have no regrets. It was a fantastic learning experience and now I’m that much more prepared for when I do it again.