Most people look at the season of winter with a scowl, dreading the harsh cold meeting the harsh darkness of short days and the freezing chill of ice and snow. When the first snowfall blanketed the city in December, I can’t really say I was really all that jazzed up myself, but two months into the season of harsh darkness and I’m feeling more inspired and motivated than ever. The snow is melting, the air is warmer and everything is falling into place.
This past Saturday morning I was still reeling from an intense week of workouts and heavy mileage, which meant my  body was achy, heavy and tired. As I hopped on the spin bike for my morning session I felt as though I was dragging lead legs around in circles on a pointless journey of repetition. In the back of my mind, I started to dread the impending tempo run to follow shortly thereafter.
As my sweat continued to form droplets of tiny pools around me and the heaviness in my legs intensified, I focused on pounding out each rotation and blocking out the negative thoughts of questioning my ability to carry on. Finally we hit the last set, and my legs came to an almost out of control stop. I flipped my feet out of the pedals and as gracefully as a blind elephant I clambered off the bike and contemplated lying down for a nap on the spot. Running a 5K tempo at this point seemed almost crazy.
After changing out of my sweat drenched clothes I walked outside and was greeted by an unfamiliar warm breeze – at least it felt warm for a February morning. Most of the snow had melted and the dark, dreariness of winter seemed a distant memory.
By the time we had finished a couple kilometres of easy warm up I was ready to ditch my long sleeved jacket for a tank top. It had been almost five months since I’d felt so free. The fresh breeze against my exposed skin was rejuvenating. With green mitted hands, black capri pants, neon pink compression socks, and my bright blue tank top tight against my pale wintery skin, I turn 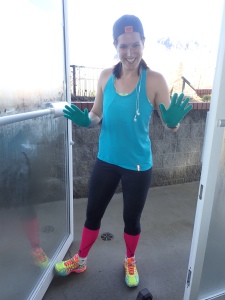 ed my trucker hat backwards and shut off the doubts in my mind. I would no longer allow myself to feel the lead in my legs – it was time to brush it off and find the spring in my step.
For the first few minutes I felt strong and relaxed, even relishing in my freedom of bare skin against the winter air. By kilometre one my heart rate kicked up, my breathing intensified and I had to set my mind into a place of enduring a suffer grinder fest. While only a short 5k tempo, they are mean and gruelling. Despite the pain and tiredness that crept back into my body, I was determined to keep my pace and would not allow myself to fall behind.
As I hit the turnaround point, coach called out my expected finish time, a time I had never hit before, and I knew what I had to do. With each passing half kilometre, I would look at my watch and with each glance I was forced to pick up the pace. My arms were getting heavy, my lungs were heaving, yet the desperation inside me wanted to hold on so badly – I was not giving in.  I had set my expectation and I would not fail.
With just a couple hundred metres to go and my goal time ticking away almost as if in fast forward, I swung my arms faster and charged through to the end. I crossed the finish marker and thought my lungs might burst from my chest as I looked down at my watch to see I had hit my time with four seconds to spare. This would mark the fourth personal best I’ve set in the last few weeks and the elation had me grinning that Disneyland happy smile from ear to ear.
All those miles and hours and bad days, angry days, frustrating, bitter, and hateful days of seeing no progress and feeling horrible pain, and finally there is a break through. You start to believe it will never happen, you start to believe that you’ll just keep piling on the hours and mileage without any progress. There are days you want to scream and maybe even cry just a little, and then there are days like this when it all comes together and your faith in everything has been restored. This journey is not easy and it can be full of ups and downs, but when you hit that ‘up’ moment, you must never forget to embrace it.